What is a refugee?
A refugee is a person who is unable or unwilling to return to his or her home country because of a "well-founded fear of persecution" due to race, membership in a particular social group, political opinion, religion, or national origin. This definition is from the United Nations 1951 Convention and 1967 Protocols relating to the Status of Refugees.

How many refugees are there in the United States and around the world?
Approximately 85,000 refugees were resettled in the United States in the 2016 fiscal year, according to the Refugee Processing Center
The U.N. refugee agency estimates there are more than 65.6 million people forcibly displaced worldwide and 22.5 million are refugees. 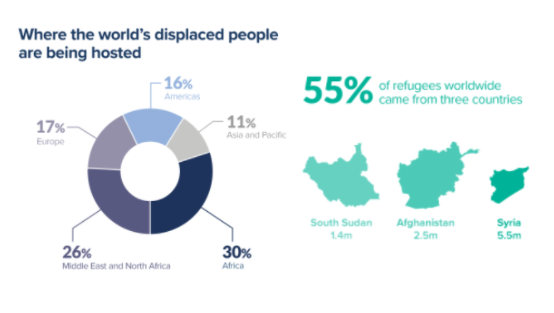 Where do U.S. refugees come from?
The top countries of origin for refugees entering the United States in 2016 were the Democratic Republic of Congo, Syria, Myanmar, Iraq and Somalia. These countries represent 70 percent of the total number.


What is the U.S.'s refugee resettlement process ?
The Refugee Admissions Program is administered by the Bureau of Population, Refugees, and Migration in Department of State, Department of Health and Human Services, and offices within the Department of Homeland Security.
There are three categories for classifying refugees under the U.S. program:Before being admitted into the United States, each person must undergo thorough interviewing and screening. Once the person has been accepted for resettlement, the Refugee Processing Center determines where the refugee shall live. Finally, when placement is secured and medical exams and security checks are completed, travel is arranged to come to the States.


What happens when the refugees arrive?

Private volunteer agencies are responsible for providing comprehensive services to empower and prepare refugees for their new life, from housing to language service to legal support. This assistance, as well as federal funding, is available for the refugee's first 90 days in the United States. After one year in the United States, a refugee can apply for Lawful Permanent Status.

What is the refugee resettlement process like in Philadelphia?
In 2016, 794 refugees were resettled in Philadelphia, the highest level since 2002. The most common places of origin were Syria, Bhutan, Burma, the Democratic Republic of Congo, Somalia, and Iraq. This aligns generally with the national statistics on refugee populations in the United States. In Philadelphia, three federally-recognized non-profits provide comprehensive resettlement support to refugees: HIAS PA, and the Nationalities Services Center. Nonprofits such as AFAHO, the Welcoming Center of Philadelphia, and Southeast Asian Mutual Assistance Associations Coalition (SEAMAAC) provide additional supportive resources, such as legal services, English classes, and cultural events, to build community and support migrant communities for the initial resettlement period and beyond.
How is PRE involved with the refugee and migrant community in Philadelphia and beyond?
PRE is partnered with HIAS PA and AFAHO to provide tutors for their various programs. PRE is partnered with Paper Airplanes, which connects tutors through virtual programming with refugee tutees all around the world. PRE also works to support and boost other programs and non-profits that support refugee communities by promoting their events on social media, hosting speakers and holding fundraising campaigns.